Man Behaving Badly: Neil Morrissey grabs Anna Friel around the mouth as they film intense fight scene on the set of Urban And The Shed Crew 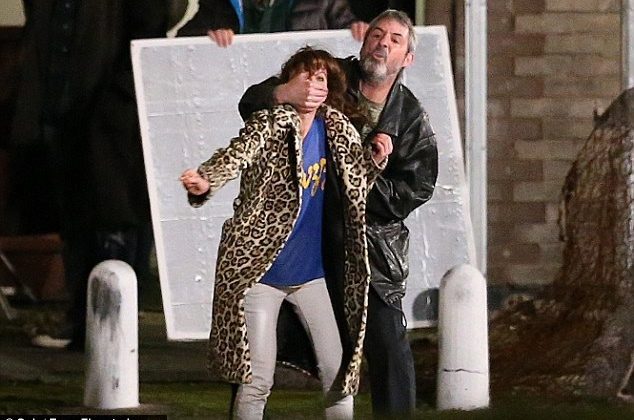 It’s a gritty story about Britain’s underclass in the ’90s.

And Anna Friel and Neil Morrissey certainly looked intense as they acted out a violent fight scene on the set of Urban And The Shed Crew in Leeds, England last week.

The actors physically grappled with each other as they re-shot scenes for the screen adaption of Bernard Hare’s 2005 best-selling novel, which documents the journalist’s time as a social worker in a deprived suburb in Leeds.

Pushing Daisies star Friel, who plays the character of junkie mother Greta, is seen screaming at Morrissey, before the melee ensues.

Wearing a leopard print coat, a blue T-shirt and white skinny jeans, she is set upon by Waterloo Road actor Morrissey in what looks like a heavy scene.

The Men Behaving Badly star, who plays the character of hard-drinking and drug-taking ex-social worker Doc in the film, grabs his co-star around the head and holds her in a kind of headlock as she kicks and screams.